I especially love this review because Ms. Ryan touches on many of the things I was trying to articulate in The Circle of Thirteen. Here’s the review in its entirety:

Review: The Circle of Thirteen 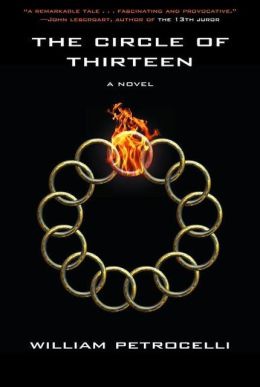 The Circle of Thirteen, the debut novel from William Petrocelli–co-owner of Book Passage, one of the West Coast’s best-known independent bookstores–is equal parts mystery, thriller, dystopian fiction and feminist polemic–all of it compelling from first page to last. It opens in 2012 in Dallas, as a little boy crouches in a closet, clutching a medal his father earned fighting the Iraqis and trying to block out the voices in the next room. His father, Jack, is screaming that his mother, Linda, is no good because she is no longer attentive to the Reverend’s teaching and is calling her girlfriend a dyke. The fighting ends with gunshots, leaving three people dead. Who is the killer? What are the ramifications of Jack’s bullying behavior toward his wife and son? For how many years, and in how many ways, will this violence roil in the boy and then in the man?

The story moves on to 2082 and an explosion at the dedication ceremony of the new United Nations headquarters in New York City. Part of the ceremony was the unveiling of a sculpture dedicated to the “Circle of Thirteen,” the founders of Women for Peace, who gave their lives to achieve world peace and justice. The 13 women, international icons, are imbued with heroic status for their insistence on “speaking truth to power” wherever they find injustice or violence. It seems likely that Patria, a misogynistic gang of terrorist thugs, would want to destroy the monument and the movement. Security director Julia Moro has been looking for Patria’s leader; the search will take her deep into her own past, to places too painful to imagine.

To his credit, Petrocelli’s richly imagined story–which also incorporates themes of climate crisis and economic disparity–does not indulge in a futuristic romp through new technologies; instead, he limits his fantasy to the vid-screen, a version of Big Brother watching you, except it’s a two-way street, and a fetching (literally) robot named Toki, who lives with Julia. The novel’s laser-beam focus is on women and their heroism–and in a story interwoven with an abundance of characters and plotlines, what stays with the reader is the bond between and among women of character, integrity and action. —Valerie Ryan